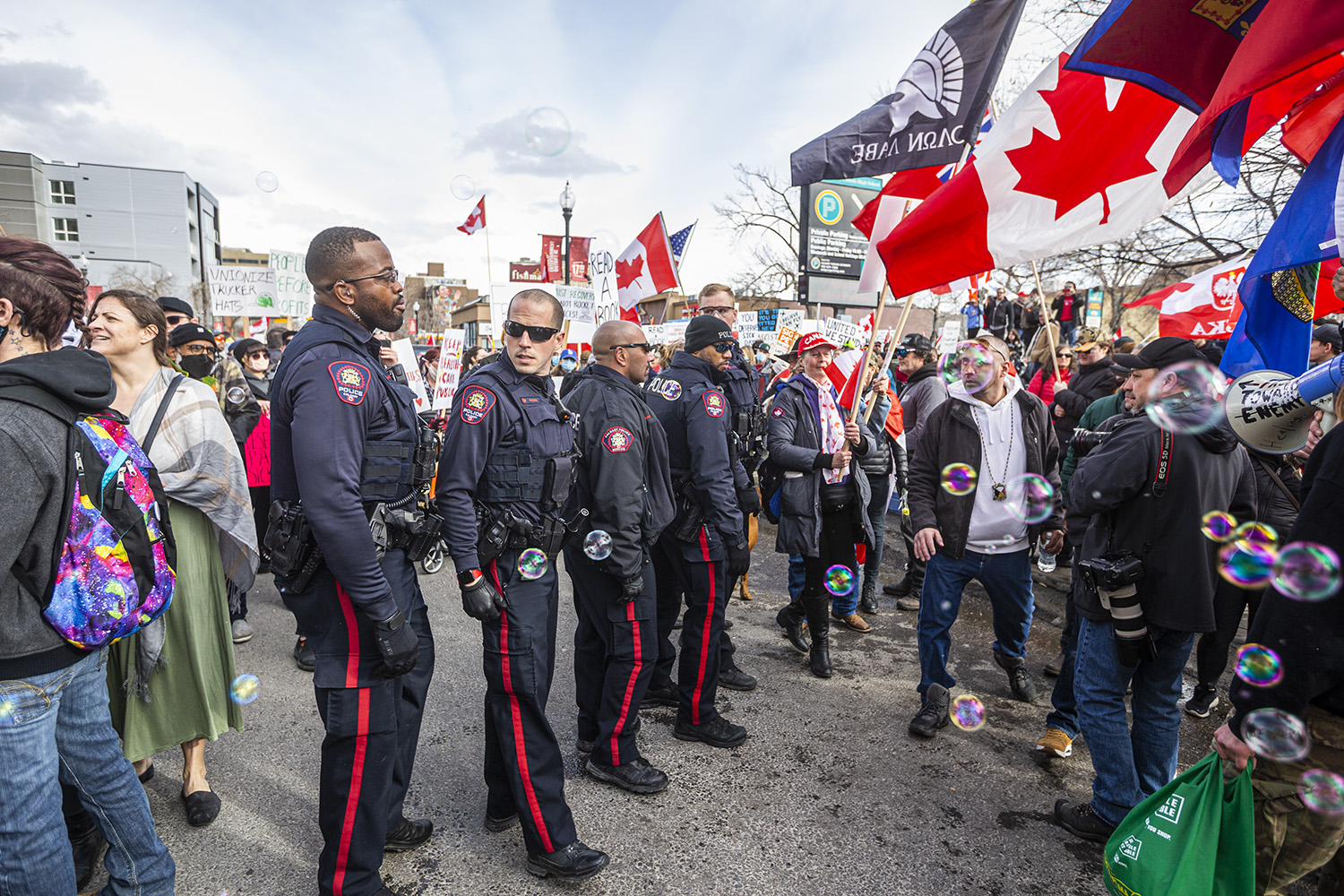 The Beltline Neighborhoods Association (BNA) is calling on fellow Calgarians to help Defend the Beltline.

Calgary police, however, are asking people to stay away from the area.

The area has been a Saturday afternoon powder keg for the past few weeks. Ongoing weekly protests have sprung up in Central Memorial Park in recent months. Residents say the protests are disruptive and have resulted in lower customer numbers for businesses in the area. They also fear for their safety.

In a page published on BNA website, they’re encouraging Calgarians who care about the Beltline to come out in support this Saturday. They are also asking people to sign a petition to submit to the Calgary Police Commission, as well as email the commission.

In a conversation with LiveWire Calgary on Tuesday, Beltline Neighborhoods Association president Peter Oliver said residents feel they have no choice but to stand up for their community.

When asked if a counter-protest was the only option, Oliver said residents felt left with no choice.

“(Residents) have shown over the past few weeks that they are frustrated and have had enough and that the CPS’s current approach to allowing these unauthorized parades and occupations of Central Memorial Park every Saturday is not not sustainable,” he said.

“We deserve the right to live in a safe community. Unfortunately, as a community, we had to take to the streets to be heard.

Oliver said other Calgarians wouldn’t talk about it if residents hadn’t confronted the ongoing protests.

On Monday, Calgary Police Chief Mark Neufeld urged Calgary Freedom Central protesters to consider the impact they are having. He questioned, given the reduction in restrictions linked to Covid-19, the need for demonstrations.

“Communities could use a break,” he said.

He also had a message for Beltline residents.

“As we work on it, and I assure you we will work on it, I would ask and urge you not to step up your efforts to take over the streets,” he said.

“It increases the risks faced, the volatility that exists for all parties involved, and certainly has the potential to cause further escalation on all sides.

“It’s something that wouldn’t be in anyone’s interest.”

In a statement released Wednesday afternoon, Calgary police asked people not to come to the area. They said they followed Beltline residents and businesses on Tuesday to find out how the protests had affected them.

“Their concern for the disruption, the safety of residents and employees and the overall impact on the reputation of downtown Calgary is very real and we sympathize with them,” the Calgary Police statement read.

“We ask anyone planning to demonstrate in the Beltline and 17th Avenue area to stay away. We all want our downtown to be a safe and welcoming place and we need your help to make it happen.

At Tuesday’s special council meeting, Jennifer Wyness of Ward 2, who has been trying to create a public hearing on the matter, said a safe place was needed.

She tried to set up a mechanism (public discussion) so that the demonstrators agreed to give up the rallies in exchange for being heard. When that failed, she too pleaded with protesters to back down.

“I really implore everyone not to show up on Saturday,” she said.

“Please try to create a safe space or walk in a different way. I’m very kindly asking people not to get into a fight and let’s make Calgary a safe place for everyone.

Mayor Jyoti Gondek said the letter sent to the police commission shared many concerns of Beltline residents. She said it outlined what they would like to hear from the commission about what they plan to do next.

She told the people of Beltline it wasn’t over yet.

“Our regulations and our peace officers will be there to help you. But we need to hear from the group that’s been running the law enforcement angle from the start. We need to know what they are doing, and we will support them accordingly. But we have not given up. »

The Defend the Beltline website encourages attendees to bring a sign, bring a friend, mask, and earplugs.

“The safety of Beltline residents is a priority for the BNA and we condemn all forms of violence,” the site said.

“We strongly encourage everyone to make sure we peacefully show our support for the community.”

Late Wednesday, the Calgary Police Commission released a statement. They also said a special meeting would be called on Friday. It can be seen on this link from 3:30 p.m.

“Like the city council, we have also received hundreds of emails and phone calls from Calgarians about these protests. We fully understand the impact this is having on Beltline residents and businesses and want to end it,” Commission Chairman Shawn Cornett said.

“This is an unprecedented situation that is extremely complicated from a legal and police perspective, but we must find a way to stop the disruption that is compromising the ability of many residents to enjoy their lives. home, their businesses and their community.”

There is no public participation, but citizens are invited to submit a letter, less than 500 words, on board before the meeting.

What is an Instagram URL? Where to find links for profiles and posts