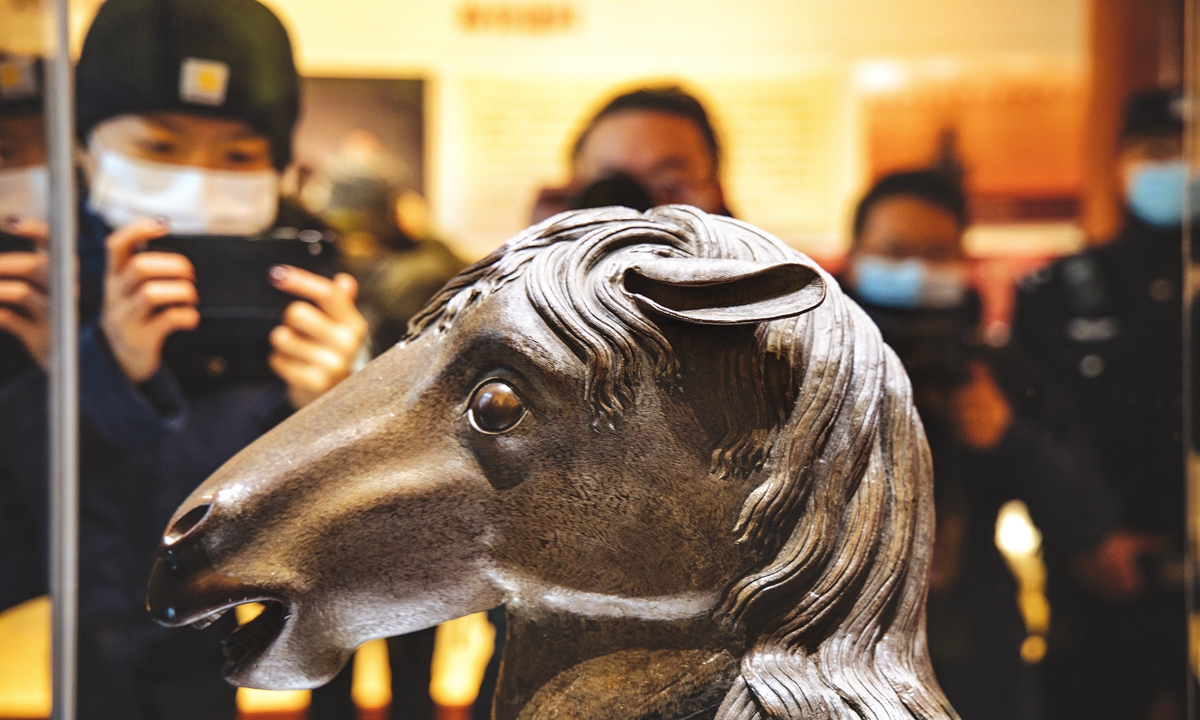 Visitors take photos of the bronze zodiac horse’s head that was stolen by invading forces when British and French troops razed the old summer palace in 1860. The statue eventually returned to his home , Yuanmingyuan, or the ancient summer palace. Photo: Li Hao / GT

The National Administration of Cultural Heritage of China (NCHA) on Sunday launched a web page dedicated to the international fight against illegal trafficking in cultural property at a forum marking the International Day against Illicit Trafficking in Cultural Property.

One section of the website features a series of priceless international treasures that are still missing. One of the pieces is a statue of a woman who was stolen from Syria in 2014 at the height of the conflict and then smuggled into Europe.

â€œThe illicit trade in antiquities is the main source of funding for armed groups,â€ the NCHA website said.

Another cultural relic is a stone Buddha head originally belonging to the National Museum of Afghanistan. The website states that “Many of the museum’s collections were destroyed during the war, and thousands of artifacts were looted from the museum by local merchants who smuggled these priceless treasures into the international market. These antiques are still not found “.

There is also an introduction to exhibitions held in China on the recovery of Chinese cultural property originally lost abroad, such as the exhibition of a bronze horse zodiac head, stolen from the ancient palace of summer and later brought home thanks to the charity of a Chinese businessman. , and an exhibition of Chinese objects repatriated from Italy.

November 14 marks the International Day against Illicit Traffic in Cultural Property, established on that day in 1970 when the General Conference of UNESCO adopted the Convention on the Means of Prohibiting and Preventing the Import, Export and illicit transfer of ownership of cultural property.

To mark Sunday, the National Administration of Cultural Heritage of China held related forums in Beijing and Shanghai, inviting experts from the museum and auction industries to discuss how best to protect cultural relics. and to repatriate those lost abroad.

Guan Qiang, deputy director of administration, told the forum that the international community has engaged in positive cooperation in combating illegal trafficking in cultural property and promoting the return of cultural relics in recent years. However, there are still many risks and challenges.

Guan reiterated that China reserves the right to appeal against cultural relics illegally looted in the country.

“Cultural property should be national, which is a basic principle in China, and we also pay attention to the warm concerns of international society,” Huo Zhengxin, art repatriation expert and law professor at the Chinese University of Political Science and Law. , the Global Times said on Sunday.

Huo pointed out that most of the cultural relics that were returned to China were repatriated through unofficial means such as trade and donations from current owners, instead of legal channels such as official diplomatic cooperation between two countries.

â€œInternational conventions that do not have strong monitoring mechanisms cannot be effectively enforced,â€ Huo said, noting some of today’s challenges and suggesting that the Chinese government should further investigate the lost cultural relics and find targeted methods to recover them from their current owners. , whether they are institutions or individuals.