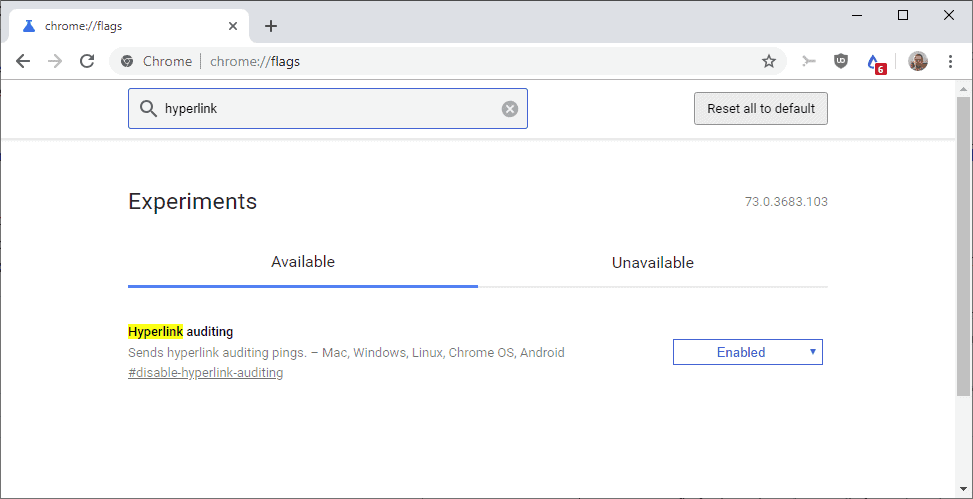 A new Bleeping Computer report from Lawrence Abrams suggests that Mozilla plans to enable hyperlink ping tracking by default in the Firefox browser.

Firefox is one of the few browsers whose functionality is disabled by default, another is Brave. Most browsers based on Chromium, Google Chrome and Opera, as well as Microsoft Edge and Safari have the feature enabled by default.

Browsers where the feature is already enabled will no longer allow users to disable the feature in future releases. Chrome users, for example, can turn off hyperlink auditing in the browser currently on chrome: // flags if they are running the stable version. Chrome users who are running the beta or other development versions will no longer find the feature listed because Google has removed it from the list of available flags.

What is Ping Hyperlink Auditing?

Links, or hyperlinks, are a fundamental HTML feature that loads another resource when a user activates it.

Ping is a new attribute that can be added to links to send information to another resource. Here is an example : this

When a user clicks on the Ghacks link, Example.com is notified that the click has taken place. It is possible to notify one or more resources of the click on the link.

How is that bad?

Ping is used to track clicks on links. The nature of how this is done is not transparent to users clicking on links because the ping attribute is not displayed and links with pings are not highlighted when a user hovers over it. the link in the browser.

Although it is possible to verify the source, it is uncomfortable and unlikely that many users will.

Besides privacy, at least one case has been checked in where pings were used for denial of service attacks.

Mozilla told Bleeping Computer that Ping has not been enabled by default in Firefox already because the feature is still being implemented.

Sites would often check for supported tracking features and simply switch to a different one if Ping was not available.

Firefox currently supports a preference that determines whether pings are enabled or not. The preference is currently set to False, which means it is not used.

Firefox users can check the browser.send_pings on about: config to configure it. It remains to be seen whether this preference will remain in Firefox once Mozilla activates the Ping feature.

Chrome users can install Ping blocker to block pings in the browser. The popular uBlock Origin content blocker also blocks pings by default, and it’s available for Firefox, Chrome, and other browsers.

Brave is one of the few browsers that has the Ping attribute disabled.

A new Bleeping Computer report from Lawrence Abrams suggests that Mozilla is considering enabling hyperlink ping tracking by default in the Firefox browser.